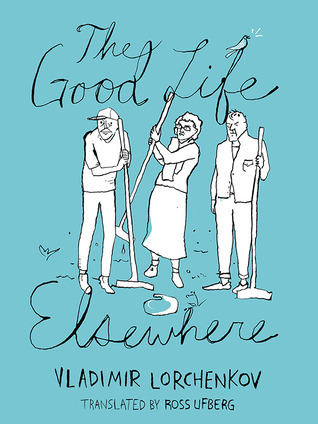 The Good Life Elsewhere
Author: Vladimir Lorchenkov
Format: Audiobook (ListenUp Title – disclaimer)
Narrator: Daniel Thomas May
Synopsis: The Good Life Elsewhere is a very funny book. It is also a very sad one. In it, Moldovan writer Vladimir Lorchenkov tells the story of a group of villagers and their tragicomic efforts, against all odds and at any cost, to emigrate from Europe’s most impoverished nation to Italy for work. This is a book with wild imagination and heartbreaking honesty, grim appraisals alongside optimistic commentary about the nature of human striving. The Good Life Elsewhere aims to present the complexity of a new Europe, where allegiances shift but memories are rooted in place. The book integrates small-scale human follies with strategic partnerships, unification plans, and the Soviet legacies that still hang over the former East Bloc. Lorchenkov addresses the vexing question of what to do when many formerly pro-Soviet/pro-Russia countries want to link arms with their West European brethren. In Lorchenkov’s uproarious tale, an orthodox priest is deserted by his wife for an art-dealing atheist; a mechanic redesigns his tractor for travel by air and sea; thousands of villagers take to the road on a modern-day religious crusade to make it to the promised land of Italy; meanwhile, politicians remain politicians. Like many great satirists from Voltaire to Gogol to Vonnegut, Lorchenkov makes use of the grotesque to both horrify us and help us laugh. It is not often that stories from forgotten countries such as Moldova reach us in the English-speaking world. A country where 25 percent of its population works abroad, where remittances make up nearly 40 percent of the GDP, where alcohol consumption per capita is the highest in the world, and which has the lowest per capita income in all of Europe – this is a country that surely has its problems. But, as Lorchenkov also aptly shows, it’s a country whose residents don’t easily give up.

Review: The Good Life Elsewhere takes us on a miserable trek from Moldova to Italy and back again over and over. It’s miserable for the Moldovan villagers desperate to emigrate to Italy, but it’s a wonderful read for the rest of us. The story finds humor and irony in horrible situations and I was surprised that the comedy translated so well. The villagers’ attempts to improve their life, by leaving behind the ones they have, are range from downright stupid ideas to strokes of brilliance in their creativity and in their ingenuity. The stories are incredibly bleak, but the book still instills hope.

I listened to the audiobook, narrated by Daniel Thomas May, and loved it. His characterizations were amazing! For an American narrator to develop such a variety of unique Moldovan voices was very impressive. You don’t need to know a thing about Moldova to connect with these characters. Great book.

One thought on “Audiobook Review: The Good Life Elsewhere”